DANIEL WOJCIK is a professor in the Department of English and the Folklore and Public Culture Program at the University of Oregon. He is the author of Outsider Art: Visionary Worlds and Trauma; The End of the World as We Know It: Faith, Fatalism, and Apocalypse in America; Punk and Neo-Tribal Body Art, and the forthcoming book, Artist as Astronaut: The Otherworldly Art of Ionel Talpazan, and he has published widely on the topics of visionary art, alternative spirituality, marginalized communities, music, subcultures, and sacred place-making. His PhD is in Mythology and Folklore Studies from UCLA. Wojcik has been a distance runner for more than four decades and is a member of the Oregon Track Club. The film “The Church of Pre” is based on his essay, "Pre's Rock: Pilgrimage, Ritual, and Runners' Traditions at the Roadside Shrine for Steve Prefontaine."   Email: dwojcik@uoregon.edu

RANDOLPH BENSON's work has garnered numerous awards, most notably an Academy Award for Best Student Documentary at the Academy of Motion Picture Arts and Sciences’ Academy Awards. Benson received an Eastman Kodak Excellence in Filmmaking Award at the Cannes Film Festival and a First Appearance Award at the International Documentary Film Festival Amsterdam. He has been an instructor of film and video at the Center for Documentary Studies at Duke University for over almost two decades and he holds degrees from Queens University, the University of North Carolina School of the Arts School of Filmmaking and Wake Forest University.  He serves on Award Juries at the Full Frame Documentary Film Festival (Durham, NC, USA), the Boone (NC) Film Festival and the Let’s All Be Free Film Festival (London, UK). Benson was also a 6 time letterman in Cross Country and Track at Wake Forest University.   Email: randolphbenson@gmail.com 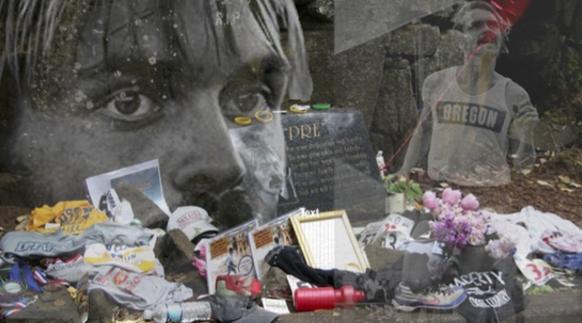 "A poignant film that captures Steve Prefontaine's charisma, explains the mythos of his persona and explores the devotion centered around Pre’s Rock."  -- Peter Jan Margry (University of Amsterdam), world expert on pilgrimage and devotion, author of Shrines and Pilgrimage in the Modern World

"An emotionally engaging portrayal of Prefontaine and his impact . . . it brings another chapter of Pre to life for those who knew him and for those that are inspired by him." -- Pat Tyson, Pre's roommate, teammate, and friend​

BRIAN McLAWHORN is an award winning documentary filmmaker and sports journalist based in North Carolina. He has produced projects for ESPN, ACC Network, NFL Network, and CBS as well as multiple independent films and commercial videos. He is most noted for his critically acclaimed television documentary specials All Access: Louisville Football (2019), The Hall of Fame Knocks (2021) and The Hall of Fame Knocks: Welcome to Canton (2022). Brian has also served as a producer, director or crew member on numerous music videos for Sony Music Nashville country music star Luke Combs. The videos have received a combined 105 million views to date. He has also written for numerous publications, including Yahoo! Sports, Rivals.com, USA Today, and NBC Sports. Brian holds degrees from Wake Forest University, Elon University and Appalachian State University.     Email: brian.mclawhorn@gmail.com